We’re excited to feature “Momentum,” a new body of work by Christopher Breedlove opening Friday, August 1st (A WPB “Orange Dot ” First Friday) from 6pm to 10pm.  Much of it was created during his summer residency at Pen, Ink & Song. 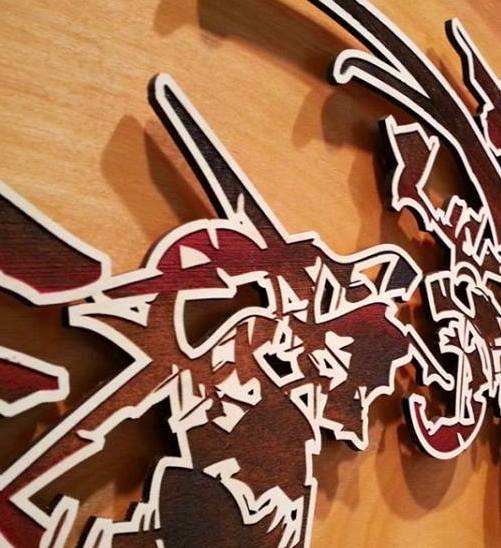 Christopher’s unique process blends natural elements such as found wood and screenprinting with the most (literally) cutting-edge laser technology, acrylic and metal to produce pieces that transcend genre and look like nothing else out there.  His work includes large scale interactive installation, heavy sculpture, delicate 3D art, fabric, woodcut and intimate wall pieces.  He references natural forms, sacred geometries and fractals, but also the form and function of the high tech tools used to create these shapes. Some of these pieces have been described as transformers “mid-transformation.” Breedlove’s art trembles at the intersection of cyberpathy and nature-reverence. He’s so varied and prolific, a visitor to PI&S these days might suspect that seven different artists working in similar styles have been producing pieces here…

It’s been a busy few years for Mr. Breedlove, and he shows no signs of stopping. Two years ago he travelled to Taiwan, where he created the Taixi Wind Temple sculpture at the TaiXi International Arts Festival. Last year he produced a group of amazing pieces called “Digital Seed” during a residency at IFL (Idea Fabrication Labs) in Chico, California. He has continued to evolve and expand his Human Avatar Project, a massive interactive projection installation that has become a fixture at the Electric Forest Festival in Rothbury, Michigan. Just this Summer, his work has already been featured in two group shows, “Zen Station: Desert Dreams” (curated by Marci Rubin) and “Emergence,” a Mako James opening at Chicago Art Department.

He’s building momentum, and its a pleasure to see him at work in the studio, putting the finishing touches on what will no doubt be one of the most exciting First Fridays of the year. Don’t miss it, and make sure to visit the other open studios in this historic artists’ colony. As usual there will be refreshments and live music throughout the building. Come get lost in the Flatiron!