I threw up a few times the morning of November 9th. 9/11 was a shock, but 11/9 was nauseating. I am deeply connected to multiple communities that are in real danger from the looming Drumpf catastrophe, but I was shocked by how visceral my response was. 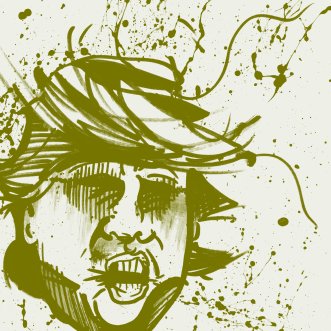 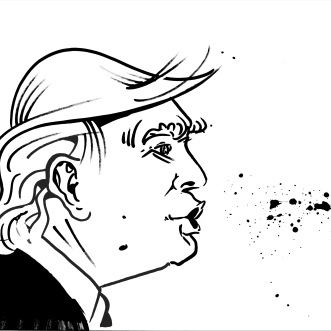 Just a day before, I had renegade installed my Trump sign-redacting sculpture #towerchicago on the Chicago river front, across from Trump Tower, complete with red carper from which to take the perfect photo of Adrian Smith’s gleaming skyscraper…one without Trump’s name on it.

I thought the sculpture would be a part of a celebration, not a bitter protest. I felt sick, and didn’t even want to go see the piece again. The urge to run was strong as well. I hold dual citizenship with the US and the EU, but it is though Latvia, a tiny, former Eastern Bloc country that relies on its NATO membership to thwart the constant threat of Putin’s Russia next door. Did we really keep an endangered language and culture alive for half a Century, only to have a reality TV-show host sell free Europe to his ex-KBG sugar daddy?

The thought of Russian troops returning to the Baltics made me physically ill for days.

So I started painting. Unlike pen-and-ink work, which is meticulous and unforgiving, I find painting to be more therapeutic; political art catharsis. Perhaps the most terrifying part of the whole election nightmare was seeing how clear it was that Trump himself was caught completely off-guard by the upset. It reminded me of Goya’s haunting Saturn Devouring his Children (1820) painted while the artist was ill, confined to his home, and disillusioned with the Spanish government.

Saturn seems surprised and horrified by what he is doing…but he continues. I couldn’t get this image out of my mind, so I adapted it to suit the current situation:

In American political cartooning, the trope of “raping Lady Liberty” has long been used to sow xenophobic fear. But since Trump himself has admitted to a long history of sexual assault against women, it seemed quite appropriate to show her disrobed. I finished the painting in three days (using acrylic paints) and then coated it with a lacquer to give it that classic oil painting look.

I also made a poster version that was a kind of veiled shout-out to this Nation cover from 16 years ago, where Brian Stauffer depicted George W. Bush as Alfred E. Neumann, before the result of the 2000 election had been decided.

Damn, do I miss the Twentieth Century.

I even find myself missing the previous decade. Looking back on my political art from the last ten years, much of it seems suddenly outdated. Remember when Sarah Palin finding herself a heartbeat away from the nuclear codes was about the scariest thing we could imagine?

Or  how about Vladimir Putin besting George W. Bush in a battle of the wits? 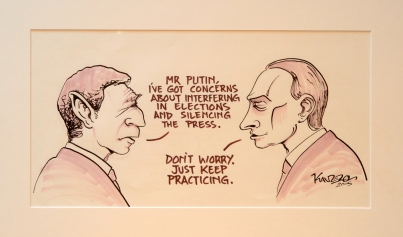 While 9/11 was a complete shock to most of us, 11/9 seemed more like the prognosis of a cancer we had suspected was growing in our body politic. For years, the Right had whipped up a bigoted base with talk of death panels and fake birth certificates. And these lies were predated by a the lie Colon Powell was made to sell; the threat of WMD in Iraq. Without bending to accommodate and normalize THAT giant lie, the incredible sacrifice made there makes no sense.

So just out of decency to our dead, we had to normalize that lie to some extent. This cancer of lying has been growing for some time. We just didn’t know it. If you know you’re sick,you can do something about it.

And if you know you’re dying (and you’re David Bowie) you can orchestrate the most dramatic album release in music history.

Bowie’s twisted, agonized figure from in the video for Lazarus was my inspiration for a mash-up of Kafka’s Metamorphosis with the national tragedy of white nationalist Steve Bannon playing alt-right Rasputin to a trust-fund sociopath. What had we become?

I call the four-foot wide painting “Uncle Samsa.” Once again painted with urgency in acrylics, then coated with an oil-based lacquer.  I used an “interference” blue-green hue to give the roach elements a sickly iridescent sheen. Sort of need to get this thing out of my studio. (Saturn sold, miraculously.)

The real reason I made the paintings was to deal with my own personal trauma following the election. Without forgetting it.  It’s important to remember. Just as we must remember the good will directed towards us by the nations of the world following 9/11 to truly appreciate the squandering of that good will by Bush and his lying cabal, we need to refuse to normalize the disease of Trump if we have any chance of cutting the cancer out.

The situation in which we find ourselves is not normal.  Trump campaigned on a series of alarmist lies, essentially claiming that the country was dying, despite unemployment rates lower than Romney promised, gas that was dollars cheaper per gallon than it was under Bush, and an economy that had almost recovered from a perennial Republican war-recession.

And now we are sick. Billionaires and Bigots are in charge, and they promise to privatize, corrupt, steal, and strip down this great nation for parts.

Now more than ever, truth is medicine.