EARLIER THIS YEAR, when I received the somber news that my friend and collaborator Tom Laporte had passed from this world, I knew almost immediately that I would try to honor his legacy at the 2017 Burning Man festival.

Tom loved everything about Burning Man; he was an integral part of the media team, a fixture on Burning Man radio and the historian and chief-elder of the Burners Without Borders camp. His absence would be felt all across the great city in the desert, and many memorials were planned, but I felt that it was also imperative to create a physical container to hold space for our camp’s collective sorrow over his death. BM is a sculpture exhibition first, so I began to conceive of an interactive shrine for Tom.

Tom loved radio, and he was a great proponent of live-streaming the Burn to the outside world. His voice is familiar to people who didn’t even know him, and he lives on in PSA’s played at both the main event and regional burns. So I kept coming back to the idea of a radio … perhaps a giant interactive radio to honor his voice? I had previously built two iterations of an interactive sound sculpture for Burning Man, an inward-projecting audio loop station called Audioreolae. I did some research and settled on the RCA 70 Cathedral Radio as a starting point for the project. It was a timeless design that would also honor Tom’s Catholic upbringing. 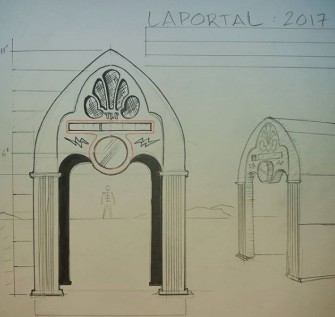 Often temples and shrines at Burning Man bear an aesthetic one might cynically call “Asian Fusion.” (2015’s Temple of Promise is the great exception.) I was excited to create a piece featuring the gothic arch, the central form of the great Northern European cathedrals whose mystical designs celebrated the divine feminine and sought to explain nature. Could the cathedral radio be both a big radio…and a tiny cathedral? Could there be an interior? In the great Burning Man sculptural tradition of toying with scale and context, I began building a big ol’ radio.

No lasers were armed in the making of LaPortal.

Instead of using Auto CAD or CNC, I hand cut the forms out of Baltic Birch using jigsaws and paper templates.  I knew that I would have to transport this thing 2,000 miles from Chicago, so I kept the scale reasonable at 10 feet tall with a slightly flared 6’ by 4’ footprint. The flared footprint made the radio seem like it was growing out of the desert, and although I would later have to mutilate it, but I would be glad I’d flared the base, not only for stability, but for smoothness of form.

For the iconic “shell” speaker port I used burlap, and the giant dial was made from an HVAC end-cap. The RCA 70 radio has a tiny dial that turns a station indicator through a small window, and I knew that I had to combine the old radio with a more modern car radio display so users could see the needle moving. This also allowed the radio to be a portal that one could walk through. Hence; LaPortal. Instead of being an obelisk one would stand around, the radio became an intimate space, with inward-directed audio similar to Audioreolae. 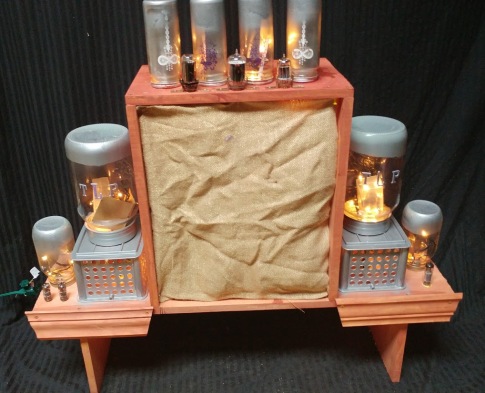 The “Altar of Tubes.”

The inside became a shrine, and instead of votive candles, I inverted Ball jars, painted the bottoms silver to create a flickering “altar of tubes.”  I panelled out a curved ceiling for the interior and painted a comical adaptation of the iconic Creation of Adam panel from the Sistine chapel ceiling fresco by Michelangelo that I called “Creation of Hotdog.” I also made a rose window with Tom’s simple, optimistic and rebellious catchphrase Fuck yeah! hidden in the design. The window was made from vellum, to create a “melting stained glass window” effect when the structure burned. 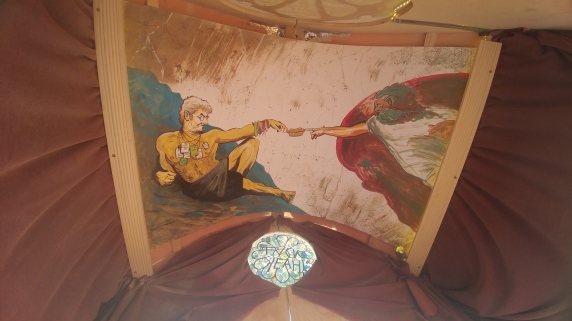 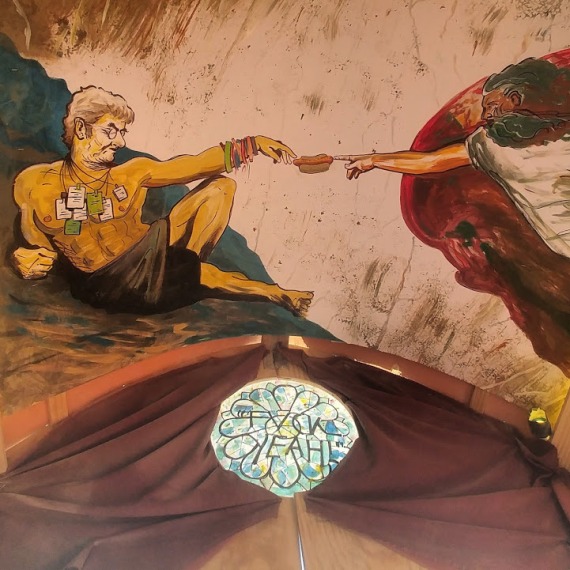 The most difficult mechanical hurdle was fabricating the linkage between the dial and the needle (a WD-40 straw). I considered using a bike chain, airplane cable, servos and even motion detectors. 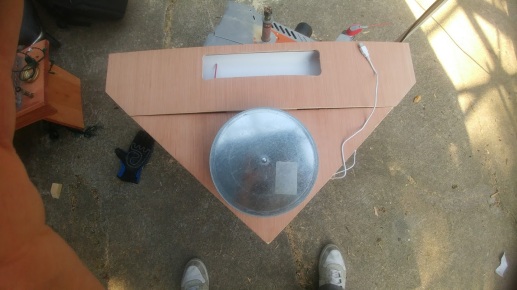 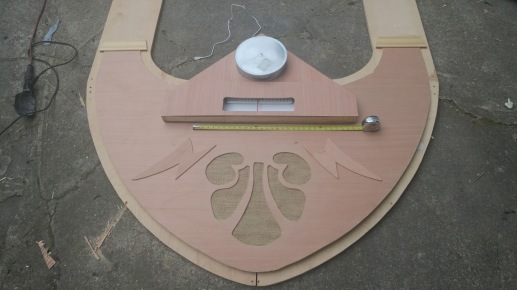 In the end, I took and cue from the Euroburner artists at Nowhere and went with the “keep it simple” approach, using a relatively straightforward rubberized-rope pulley system.

Hidden under the face of the radio was a USB MIDI key-controller, and the pulley system would glassando over the keys with a plastic ball (upcycled canopy tie) triggering both audio content, as well as specially composed AM radio “white noise” between the stops. Sometimes the ball would get a little stuck, or trigger both content and white noise. You had to fiddle with the radio dial, but that was the point; In essence, the interactivity was an exercise in using digital tech such as LEDs and USB audio to create the look and feel of a tube-driven, analog device. The lighting plan for the sculpture was a simple, warm yellow.

The next step was programming the audio.  I’m immensely grateful to Joshua Gunty and Kevin O’Neill for their efforts here. We used an old Macbook running Ableton to power the sound, and created 4 different sets so that the content would change throughout the week on Playa. We programmed ten “stations” per set. (In keeping with the Catholic theme, these truly were the “stations of Tom.”) Some stations had PSA’s, some had content from Tom calling the Manburn. We included content from BWB telesalons and the BM Global Leadership Conference. We even included Tom’s interview with Abbie Hoffman, recorded when Tom was just seventeen. I broke the sculpture down into a 8’ by 4’ by 10” flat-packed package and had the excellent and reliable Chi-Cargo service ship it to Nevada. 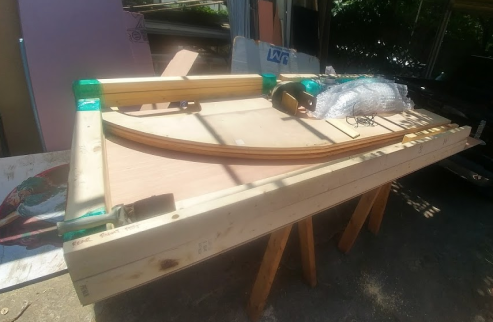 I had one last stop to make before heading out West. I met up with Tom’s son Daniel and picked up Tom’s ashes, which the family had decided should make their way to Tom’s favorite place. Danny related to me something Tom had said to a friend a few days before he died:

“The resistance is back on. You and I both know how to do it. Dare to Struggle. Dare to grin.”

I flew to Reno with Tom’s ashes on the seat next to mine and with that quote in my mind. 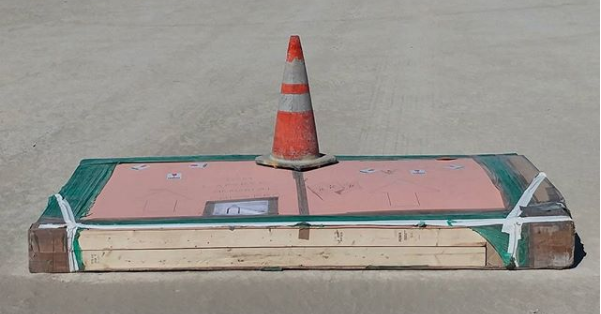 In classic TLP tradition, LaPortal was a renegade project. Tom passed in March, when many BM projects have already been underway for months (letters of intent for honoraria sculptures are due 9 months out). BWB’s camp real estate includes a portion of open desert across Esplanade, and we are permitted to curate this swath of open Playa. As far as placement, electrical supply, breakdown and disposal were concerned, the Radio Cathedral was nothing more than a piece of camp deco.

Crowdsourcing for materials was done once at the Freakeasy Pre-compression event, where the radio was activated with a beta version of the interactivity and content. I made a birdhouse-sized radio with a contribution hole and Burners filled it with cash. No Facebook or Gofundme involved.

We placed the radio about 50 feet into the desert across Esplanade from BWB camp, framing the Man, next to Donkey Boy’s Temple of Tension tightwire clinic.

Detail showing Manbase in the distance.

Throughout the week both friends and strangers were able to hear Tom’s voice on Playa one last time. There were tears and there was laughter, but most importantly there was Tom. I had enormous help from David Schnack and Kellie Larson, who decorated the inside of the radio with a thick red fabric to create a somber and sound-dampening environment. People wrote messages to Tom on the inside of the structure, where there was just enough room to spend a few moments listening. 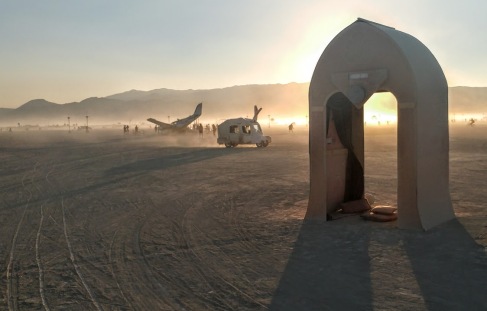 We celebrated Tom’s life with a service Wednesday night, and there were special moments where strangers who had known Tom met each other for the first time and remembered their departed friend. 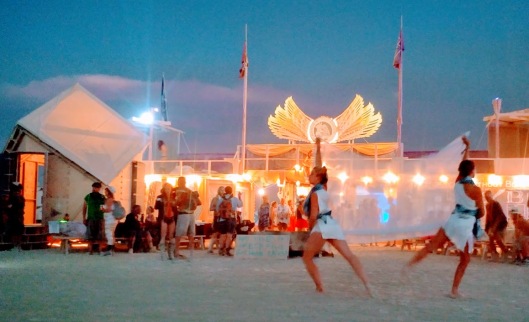 One of Black Rock City’s greatest resources is a seemingly endless supply of radial serendipity. I never cease to be amazed by the coincidences I experience on Lake Lahontan. My final touch to the radio was a vintage-looking, braided two prong power cord, basically a sight gag.

A worklight shell filled with expanding foam and plywood prongs made it look like the ghost radio was unplugged. The foam made it light and springy in the wind. And what was the next project down the street on the desert-side of Esplanade?

A giant, marble outlet at the same approximate scale. I could have just about plugged mine into theirs. (Ask first). And we were unlisted, it wasn’t a placement gag. Curation via pure serendipity.

The week wore on.  The $100 Macbook never crashed and LaPortal played, its inside filling with sharpie messages to Tom around the altar.

Soon it was Sunday.  My plan had always been to burn the radio shrine in the ashes of the Manbase on Sunday morning, and I had taken care to build the radio out of formaldehyde-free luan for a clean, non-toxic burn. The whole sculpture could be mounted on skis to and dragged to the center of Burning Man, but due to unforeseen circumstances that deserve no further mention, the Man base was closed Sunday, and no-one was able to burn small effigies. What to do?

Burners Without Borders camp has a New Orleans fire-pit that dates back to the organization’s inception, helping with the rebuilding in the Gulf Following Hurricane Katrina.

The pit measures just over 48” square, so with a little deconstruction and a little luck, I was able to remove the bottom flare of the structure, get it down to four feet square and place it in the pit. I biked over to BMIR and placed an announcement that we were burning Tom’s radio at sunset “at home.” We had a 5-gallon bucket of water and 4 fire extinguishers on hand, and placed a team member up on our deck to watch for errant embers. 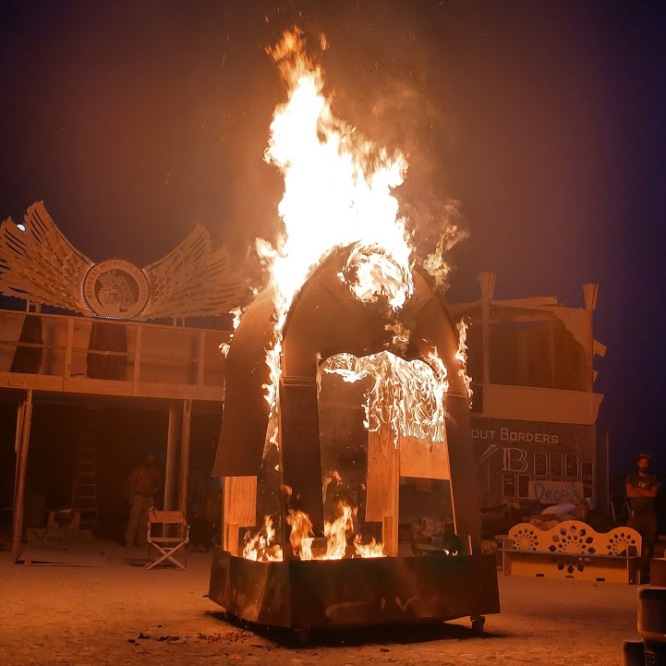 As the sun dipped behind the Western mountains lining our Lake of Dreams, we lit the radio. The structure burned without need for any accelerant, as the fire climbed the 2×4’s in the corners of the radio. 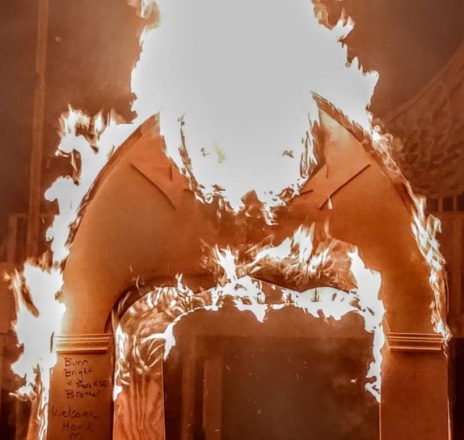 Flames poured out the speaker port just as planned, the birch burned slowly while the burlap sparked right up. I had added some colorant to make the inside of the ceiling drip blue and green fire.

Just as the rose window began to melt, we saw the Temple ignite in the distance. A Temple builder friend had scaled that structure and placed some of Tom’s ashes at the very top of the spire, facing the city. 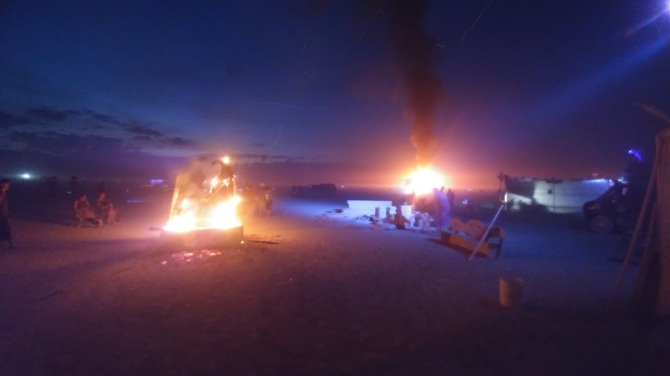 The two fires burned in unison under an almost-full moon, contrasted beautifully by the infinite shades of violet created by a spectacular Black Rock desert dusk.

Even for Burning Man, it was really something. 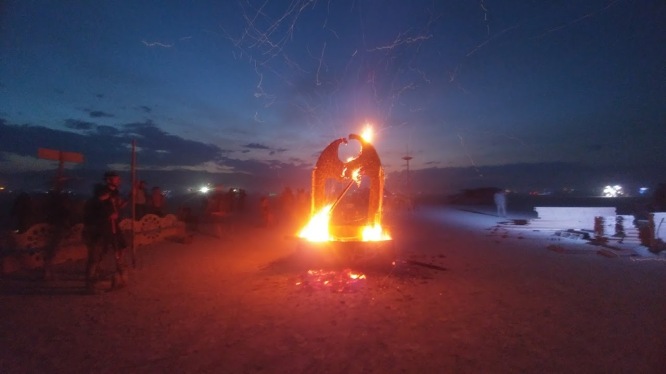 In the end, the gothic arch is what made our unorthodox burn a success; the weight of the structure was directed inward, and the sculpture collapsed in on itself, with just a few small pieces falling outside the pit.

It was an incredibly beautiful moment, and I feel that we did some justice to Tom’s many contributions to our city, our camp and our culture.

Although the large radio is now just ashes and memory, I’ve since built a miniature version about the size of a jukebox to house the interactivity and Tom audio content. This version of the radio will be on display at the upcoming BWB Chicago fall grant salon, Nov 14th at Transamoeba studios.

We’re also keeping the audio we collected available online at the newly-created www.laportal.org

This site will also serve as a contribution portal for more Tom content so that if we ever re-create the installation, we’ll have even more content.

But mostly, thank you Tom.